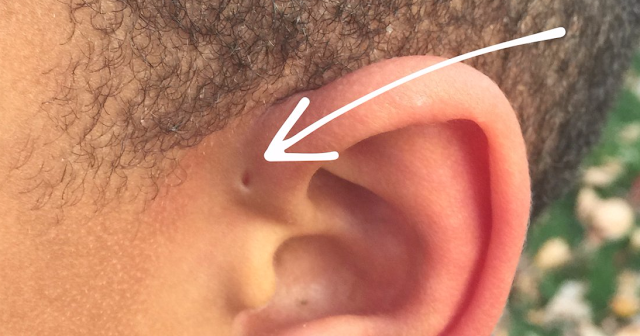 You might have noticed that a few people have a barely noticeable hole where the top of their ear cartilage meets their face. Believe it or not, it’s probably not the remnants of an old piercing they had when they were 15.

Just 0.1 percent of the population have it in the US, 0.9 percent in the UK, and as many as 4 to 10 percent in Asia and parts of Africa, according to one study. In South Korea, that figure could be as high as 5 percent, and it’s most common in people of African or Asian descent.
A preauricular pit is a small hole in front of the ear, toward the face, that some people are born with. This hole is connected to an unusual sinus tract under the skin. This tract is a narrow passageway under the skin that can cause infection.
Preauricular pits go by many names, including:

This tiny hole in front of the ear usually isn’t serious, but it can sometimes become infected.

Preauricular pits occur during the development of an embryo. It most likely occurs during the formation of the auricle (the outer part of the ear) during the first two months of gestation.
Preauricular pits are usually harmless and typically don’t cause any health issues. Sometimes, they become infected and require a course of antibiotics.