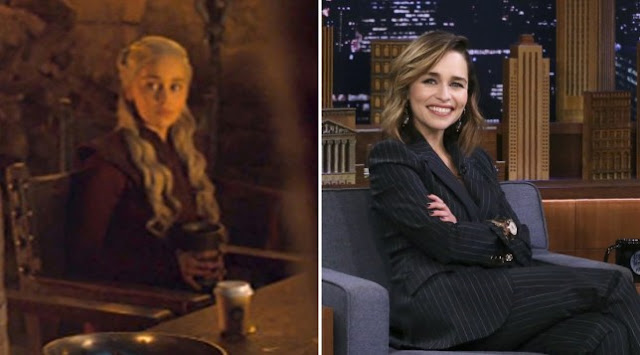 Our long national nightmare is finally over: We finally know who left that coffee cup in a shot in Game of Thrones’ final season!
Emilia Clarke, who starred as Daenerys Targaryen on the hit HBO fantasy, is not a fan of how much blame she’s received for the now-infamous Starbucks-like coffee cup that was spotted in front of her during season 8, episode 4, “The Last of the Starks.” During the Winterfell feast, the to-go cup is clearly out of place among the medieval goblets and tankards, and Dany is the only one sitting at the table where the cup is placed. That’s why her costar Sophie Turner previously implicated Clarke on The Tonight Show for the cup accidentally making it into the final version of the episode (before she also blamed Kit Harington).
So Clarke has decided to set the record straight on The Tonight Show by finally revealing the coffee cup culprit’s real identity.
“Here’s the truth,” Clarke tells host Jimmy Fallon in a clip from Wednesday’s episode. “We had like a party before the Emmys recently, and Conleth [Hill], who plays Varys, who’s sitting next to me in that scene, he pulls me aside and he’s like, ‘Emilia, I’ve got to tell you something. I’ve got to tell you something, love. The coffee cup was mine!’ It was his! It was Conleth’s coffee cup. He said so.”
Clarke goes on to explain why Hill didn’t come clean sooner. “He’s like, ‘I think so, I’m sorry darling, I didn’t want to say anything because it seemed [like] the heat was very much on you,’” she says. “And I was like, ‘What?!’”
She goes on to clarify that she only thinks that’s who did it because no one knows for sure. “He might have been drunk, but he said it.”
You want to laugh go and Check out a clip of the shocking revelation on the next page :